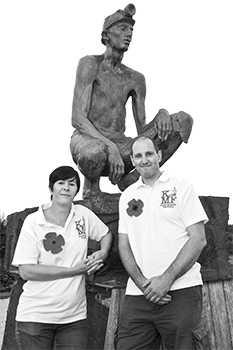 This year’s annual Kent Miners’ Festival will be celebrating with reaching 10 years since the festival was held back in 2009. That first festival was organised by the event’s Chairman Gary Cox, who wanted to organise a festival for the whole east Kent community, that would mark 20 years since Betteshanger Closed as last colliery in Kent, along with commemorating 25 years since the year long 1984/85 National Miners Strike had taken place. Gary continues as our event’s President.

Many of the former Kent miners had not met since they were working together at each of the four Kent collieries and many of them had lost contact with old work mates and colleagues following the closure of the collieries. The idea of a festival was organised that would allow the traditional mining galas to be showcased, which were regularly held by each of the mining communities when the collieries were still in existence. At the same time, the event’s organisers, the Move the Miner Committee, were planning to have the Waiting Miner Statue moved from Dover seafront and moved to its present location, which is now situated as a priming feature on a plinth on the A256 roadway between Deal and Sandwich, outside the entrance to the Betteshanger Park. Planning permission was granted for the state’s new site just days before the first festival went ahead, and the statue became known as the Kent Miners Statue. The memorial was officially unveiled and dedicated in July 2011, and remains standing as a lasting memorial to all those men and boys, who were all tragically killed during their work in the Kent Coalfield, as well as a lasting legacy to all the many men, who worked in the Kent Coalfield.

It was estimated that almost 10,00 people visited the festival, which was held on the August Bank Holiday Monday 2009. This success of that first showed the anticipation of many local residents, both from former Kent mining communities and the general public, who live across east Kent and further afield. The following year, the festival was decided to be held on both the Saturday and Sunday of the August Bank Holiday weekend, with the event showing a continued success. It was decided that the festival would become an annual event that would then see the festival be held from two consecutive years at the mining community of Aylesham, two years at Elvington and then return to its original home at Betteshanger, where the festival now continues.

Personally, I did not become involved with the Kent Miners’ Festival until 2010. In 2011, I was asked to become a heritage representative for Tilmanstone Colliery and the mining community of Elvington, and became an establishing member of the Elvington and Eythorne Heritage Group, and Heritage Centre that was officially opened in 2013, which coincided with the first coal raised at the East Kent Colliery (Tilmanstone Colliery) on 12th March 1913. My involvement with the festival came as I wanted to help with celebrating the rich heritage our Kent mining communities have, as well as commemorating the work that was made by one of my great grandad’s, one of my grandad’s and my father, who were all Kent miners.

Since the Kent Miners’ Festival was founded in 2009, the event has become a well known local and nationally recognised mining community event, with participants and visitors coming from all over the country. The event continues to be a free entry public event, which requires necessary funding and support from many local residents, charities and organisations, which we are very thankful for. With the festival having now reached its 10th anniversary, we are going to be commemorating 50 years since the closure of Chislet Colliery in July 1969, and also 30 years since Betteshanger Colliery closed in August 1989, which became the final colliery in Kent.

The spirit and enthusiasm of those people that were either born or live in the Kent mining communities today has not been forgotten as the sports teams, colliery welfare bands, colliery welfare choirs, welfare clubs, and the heritage groups all continue to display the legacy of the Kent miner and their families. The opening of the new visitor centre and Kent Mining Museum at Betteshanger Park will be highlighting the heritage of our Kent mining communities and pass on our Kent mining legacy for the future generations.

BOOKING FORMS FOR THE 2019 FESTIVAL

Booking Forms will be available to download here very soon. Booking forms for charities or community organisations are available by contacting Chris Tough or Samantha Broadhurst. Details on the Health and Wellbeing page.